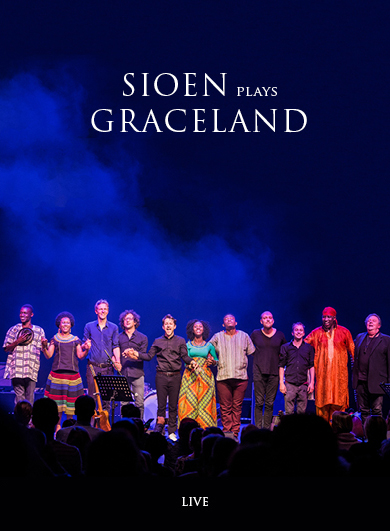 We are happy to announce the release of the live album ‘Sioen plays Graceland’, recorded on tour (december 2017) .

You can order the CD via this link https://www.sioen.net/album/sioen-plays-graceland/ , then click ‘BUY CD’ and send a message to Sioen. You will get a reply very soon! 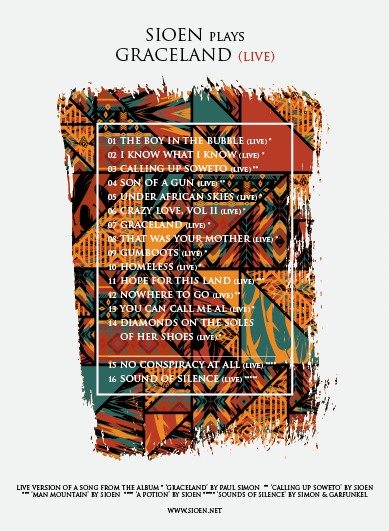 In 1986 Paul Simonwent to South Africa for the recordings of the album ‘Graceland‘. More than 20 years later Sioen fell in love with the land of Nelson Mandela and gospel and recorded ‘Calling Up Soweto‘. Sioen, in the footsteps of Paul Simon.

The album ‘Graceland’ features many hits like ‘You Can Call Me All’, ‘Diamonds On The Soles Of Her Shoes’, ‘Under African Skies’ … but Sioen got to know the album much better when he was asked by Oxfam’s‘One Day For Another World’(Gentse Feesten 2008) to go to Soweto, the famous township near Johannesburg for a musical collaboration. The interaction with experienced local musicians was so inspiring and Sioen decided to record a full album, by coincidence in the same studio where ‘Graceland’ was recorded.

Paul Simon created a unique sound: effortlessly he combined his musical footprint with the skills of the South African top musicians he met. ‘Graceland’ became a controversial record: in the mid ’80ies Apartheid still thrived in South Africa and supporters and opponents expressed their discontent about the collaboration during an international cultural boycott. But when the release of the album was followed by a tour with famous black South African musician, ‘Graceland’ also opened a path for South African music to get international exposure, as it had been in limbo because of Apartheid.

Last year Sioen was asked by the Gent Festival Van Vlaanderento perform the album ‘Graceland’ with his South African friends. The concert in a sold out Capitole became a huge success. Het Nieuwsblad kopte: ‘South Africa was never that close’. And Sioen added: ‘A real celebration of what music is about’. Now on tour.

For this tour Sioen invites his band and the South African backing vocals from ‘Calling up Soweto’, N’Faly Kouyaté from Guinea (Afro Celt Sound System) and Rony Verbiest on accordion and saxophone.